Qi Arrow strongly supports floating offshore wind technology. Through different projects with key actors in the national territory, Qi Arrow is promoting a technology that could solve national energy shortages and the high dependence on fossil fuels purchased outside our borders. The draft of the Integrated National Plan for Energy and Climate 2021-2030 (PNIEC), following in the wake of the European Green Deal, states that renewable energies in 2050 will represent 42% of renewable energies over the total final energy consumption with 50 GW installed of wind energy  from the current 28 GW (that is, 22 GW in 10 years). Although offshore wind is explicitly mentioned, there is no discrimination between onshore and offshore wind, nor fixed or floating wind, although it does indicate that a “Spanish Strategy for the development of offshore wind” will be launched as soon as possible.

In Spain there is a physical limitation for the development of offshore wind with fixed solutions, since the continental shelf descends very quickly and immediately to high depths. For reasons of technical and economic feasibility, the use of fixed solutions is limited to the range of shallow water, generally up to 30 or 50 meters, so the much more expensive floating systems must be used when surpassing such depths.

In the document ‘Our energy, our future. How offshore wind will help Europe go carbon-neutral’, prepared by WidEurope in September 2019, it is indicated that the European Commission needs between 230 GW and 450 GW of offshore wind by 2050, making it a crucial pillar in the energy mix together with onshore wind. 450 GW would meet 30% of Europe’s electricity demand in 2050. From them, 70 GW would be located in Southern European waters (applying floating technologies). Today Europe installs around 3 GW offshore wind per year. This must be increased to 7 GW per year by the second half of the 2020s. After 2030, this needs to rise to over 20 GW per year. In Southern European waters: From now to 2027, the rate would need to rise from almost 0 to over 4 GW per year or 840 km2 per year.

The forecast for the year 2050 in said document indicates that Spain should have an installed capacity of 13 GW, however nowadays Spain only has a 5 MW floating wind turbine connected in the Canary Islands.

If we analyse the current situation of offshore wind in Europe, the floating wind fleet is the largest worldwide (70%) with a total of 45 MW by the end of 2019. This includes Hywind Demo (2.3 MW), SeaTwirl S1 (0.3 MW), Hywind Scotland (30 MW), Floatgen (2 MW), Kincardine Pilot (2 MW) and the Windfloat Atlantic Phase 1 (25.2 MW). The European funded project Wind2Power developed a 1:6 scale prototype of 200 kW using Enerocean technology, (WIP10+) that was successfully tested at PLOCAN site in the Canary Islands from June to October 2019. Qi Arrow contributed to the business and environmental analysis.

Other demonstration projects are testing different floating concepts aiming to reduce cost or upscale previous demonstrators. The DemoSATH (SAITEC), TetraSpar (Stiesdal), SeaTwirl S2 (SeaTwirl), Eolink (Eolink), and EU projects such as FLOTANT and X1Wind are examples of these innovative designs. In table 2 prepared by WindEurope we add the offshore wind capacity installed at the end of 2019 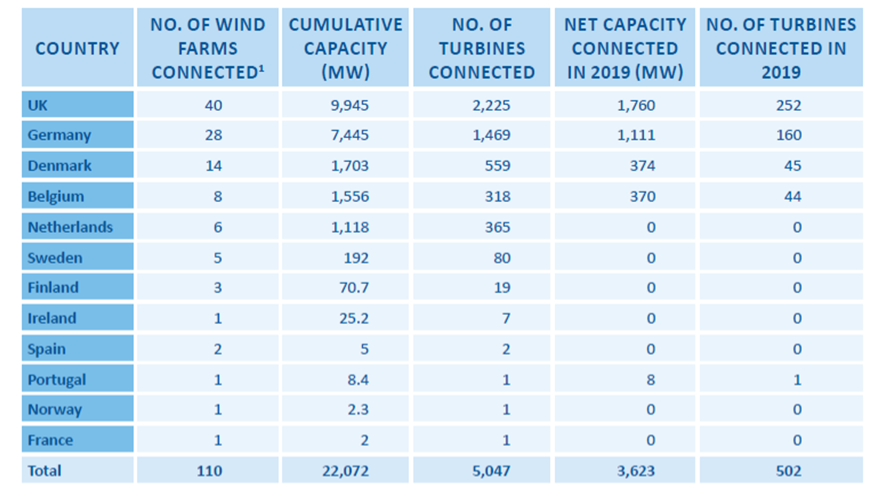 Spain, whose offshore wind sector currently consists of a single 5MW turbine mounted on a gravity-based foundation in Gran Canaria, last year granted a permit to Norwegian energy giant Equinor to build a 200MW floating wind farm off the Spanish-owned Canary Islands which according to the regional government could start operations as early as 2024 if further regulatory hurdles are overcome. Table 3 below shows the floating offshore wind pipeline for the next three years where Spain is not represented (unless the Equinor windfarm will be implemented). 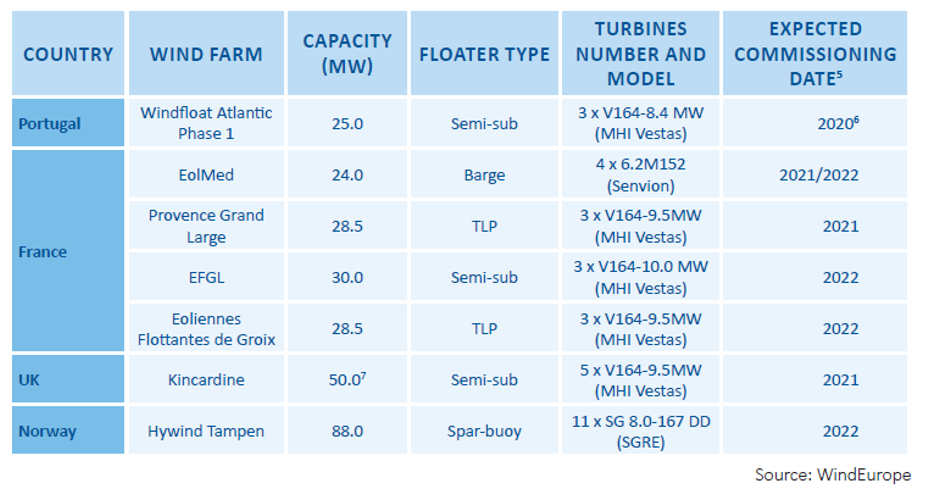 A new floating project recently approved with EU financing and led by Iberdrola will be in operation in the 4th next years as well. The project is called Flagship based on a semi-submersible 10 MW concrete platform with the target to reduce LCOE to values between 60 to 40€/MWh. Iberdrola’s Spanish partners in Flagship are Core-Marine, Cener, IHC and Zabala Innovation Consulting. For Norway, Olav Olsen, Kvaerner, UnitechSubsea and Met Center are participating. The initiative also includes the French power company EDF, the Danish group DTU and the German company DNV-G.

We still have time to increase the state support for floating offshore wind power to create a local market with sufficient critical mass, essential for our strategic industrial sectors, which would allow to consolidate its development and recover the lost ground to position Spain as one of the leaders in this technology.

Inaction is no longer an option, Collaborative Ecosystem for Rapid Sustainability...
Scroll to top

This site uses cookies. By continuing to browse the site, you are agreeing to our use of cookies.

We may request cookies to be set on your device. We use cookies to let us know when you visit our websites, how you interact with us, to enrich your user experience, and to customize your relationship with our website.

Click on the different category headings to find out more. You can also change some of your preferences. Note that blocking some types of cookies may impact your experience on our websites and the services we are able to offer.

These cookies are strictly necessary to provide you with services available through our website and to use some of its features.

Because these cookies are strictly necessary to deliver the website, refuseing them will have impact how our site functions. You always can block or delete cookies by changing your browser settings and force blocking all cookies on this website. But this will always prompt you to accept/refuse cookies when revisiting our site.

We fully respect if you want to refuse cookies but to avoid asking you again and again kindly allow us to store a cookie for that. You are free to opt out any time or opt in for other cookies to get a better experience. If you refuse cookies we will remove all set cookies in our domain.

We provide you with a list of stored cookies on your computer in our domain so you can check what we stored. Due to security reasons we are not able to show or modify cookies from other domains. You can check these in your browser security settings.

These cookies collect information that is used either in aggregate form to help us understand how our website is being used or how effective our marketing campaigns are, or to help us customize our website and application for you in order to enhance your experience.

If you do not want that we track your visit to our site you can disable tracking in your browser here:

We also use different external services like Google Webfonts, Google Maps, and external Video providers. Since these providers may collect personal data like your IP address we allow you to block them here. Please be aware that this might heavily reduce the functionality and appearance of our site. Changes will take effect once you reload the page.